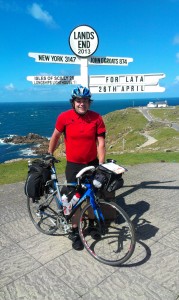 On the 27th April, Jonathan Goldsmith set off from Lands End to travel the 940 miles to John o’Groats by bike, aiming to do the trip in just 6 days (!) to raise money for Friends of Alalay. Unfortunately, we have just heard that he has had to abandon his ride on day 3, having sustained a knee injury whilst getting out of the way of a careless driver somewhere in Cheshire. He is “terribly disappointed but vows to complete the rest of the journey, from Alderley Edge to John o’Groats, in the future”.

“Jonathan  (Audley Latin America) is raising funds to help us support street children in Bolivia. He set off from Lands End on 27 April, endeavouring to cycle 940 miles in just 6 days.

Two years ago Jonathan and his brother Paddy cycled the journey in 12 days.  They camped all the way in what Jonathan describes as one of the most amazing fortnights of his life. When they reached the finishing point they were feeling pretty pleased with themselves until two other guys turned up saying they had done it in 6 days. From that day on Jonathan vowed that he would match it.

Jonathan and his wife travelled through Bolivia some years ago and were both awestruck by its beauty and its people. Working for Audley Latin America he has been following the work of the LATA Foundation with interest and with two children of his own (Ben and Phoebe) he was keen to support a project involving children.”

This entry was posted in Uncategorized. Bookmark the permalink.